Windows: fixed a crash with some audio drivers on Windows 8, for the bit application. New Features: Now available as a standalone application.

Fixed issue with Izotope Audio Units that were configured as mono effects on stereo tracks. Fixed crashes during auto save with Kontakt 5 in Pro Tools Missing VST plug-ins can now be relocated if not found. The plug-in now saves missing plug-ins' state so that they can be restored later. Fixes and compatibility improvements: Fixed issue on Mac when loading sessions created on Windows using VST plug-ins in sub-directories. Fixing compatibility issues with several plug-ins that used to crash when unloaded Image Line, MeldaProduction, Catanya Mac Fixed randrom crashes when using keyboard shortcuts in the host application to switch between plug-ins or tracks.

Mac Fixed parameter changes sent from host not visible in the user interface for some Audio Units u-he New Features: Selectable parallel processing chains summing mode: sum or average. Solo button for parallel chains. MIDI Channel filtering for each plug-in input. Mac Fixed crash introduced in 1. Mac Fixed wrong plug-in instantiated in some cases when selected from a VST shell package. Plug-ins can now be pasted into a slot with their params map.

AAX Fixed inaccurate transport information reported to sub plug-ins when stopping playback in Pro Tools. Plug-in instance Renaming: it is now possible to give a name to each instance of a plug-in. Mono to stereo processing: the plug-in can now be used as a mono to stereo plug-in and process mono tracks with stereo effects in hosts that support it. Improvements: Improved performance of undo tracking when loading presets for plug-ins with many parameters.


The "Parameters Map" menu item is now checked when a parameter is mapped. Improved performance when changing the size of the plug-in user interface. Fixes and compatibility improvements: Fixed keyboard stealing issue in many host applications when sub plug-ins editors are opened except bit applications on Mac. Fixed compatibility issue with Pro Tools 9 on Mac random crashes. Fixing crashes with some plug-ins requesting information while being opened. New Features: New parameters mapping feature for sub plug-ins automation includes a "learn" mode for easy mapping : Up to 40 parameters can be mapped to external controls.

How does Affirm works?

Our plug-in's advanced automation and MIDI control features can also be used to map controllers to sub-plug-ins parameters. New layout to display mapped automation controls in the main user interface. Added phase flip buttons for each parallel chain, so that you can easily compute differences between signals or correct phase problems introduced by some plug-ins. Link all pre and post gain knobs so that pre gain changes are automatically compensated by the post gain knobs. This can be used to easily push dynamics or distortion plug-ins without increasing the volume. 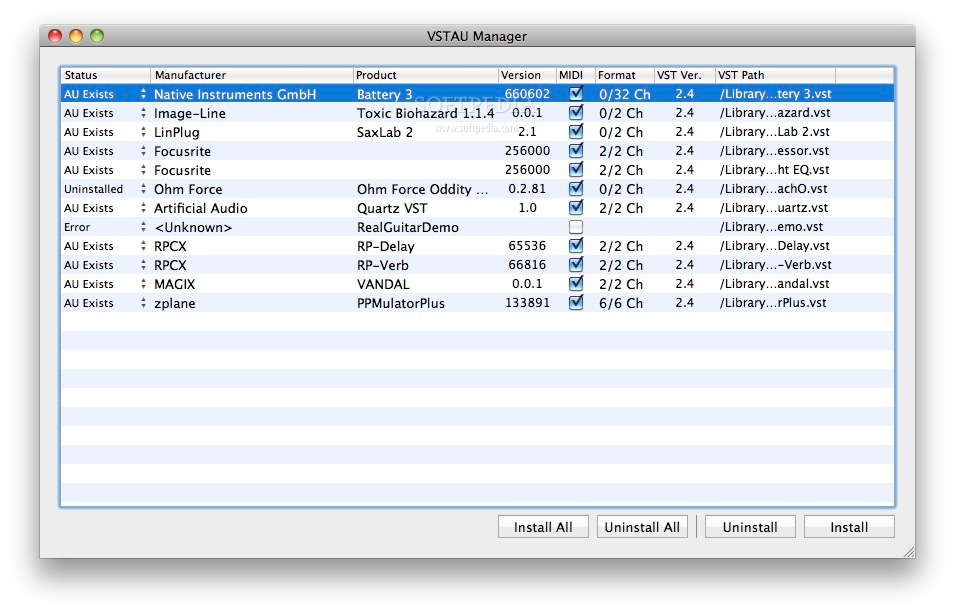 If nothing happens, download Xcode and try again. If nothing happens, download the GitHub extension for Visual Studio and try again. From the original documentation :. Optionally, you may choose to use a pre-built "wrapper plug-in" for adapting your existing VST plug-in to the AU standard without even having to recompile any source code. It was originally hosted on Google Code but doesn't appear to have been actively maintained for some time now the last commit by Magnus was on April 22, This repository is also an import of the Symbiosis repository.

Ignore Learn more. Dismiss Join GitHub today GitHub is home to over 40 million developers working together to host and review code, manage projects, and build software together. When the grid is toggled 'off', you can move the MIDI event or Soundbite anywhere you like in time, but when the grid is on, the smallest move you can make is exactly equal to the setting in the pop-up menu. That seems perfectly intuitive, but DP's approach is to maintain the position of the moved event relative to its original location.

You can click on any of the fields to enter a new value directly. Cubase SX handles things differently. When its equivalent of the Edit Grid is turned on, moving a MIDI event causes that event to 'snap' absolutely, not relatively, to the grid, causing the event to be both moved and quantised, as it were. Maybe it was because of what I was working on, but this struck me as a better approach to editing for the majority of tasks, and especially for dragging Soundbites around into rhythmic patterns.

It is, then, quite bizarre to learn that DP, in its current incarnation, just can't be persuaded to reproduce this behaviour. There are three ways to do something similar, but they're all a bit fiddly. The first is to select the event and hit Apple-0 zero to call up the Quantize window, quickly select an appropriate resolution, then hit Return to apply the operation. This at least gets the event bang on some meaningful division of the beat, as does selecting an event and directly typing in a new location for it in the graphic editor's Event Info bar.

You can also just drag the event, with the Edit Grid toggled off, and release it when the location in the info bar shows it to be on a simple sub-division of the beat, but this really can be fiddly, depending on the current level of zoom. But with an event on the beat you can at least begin to drag it with the Edit Grid toggled on. Now, the signs are that MOTU might provide a true 'snap to grid' function, like Cubase's, to augment its current behaviour before too much longer.